History of the CTK ​ 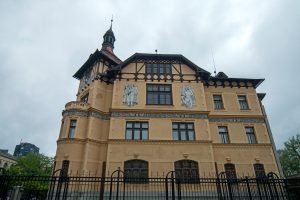 The library was established in November 1949 at the Technical College in Ljubljana as a public university library for technology. From 1949 to 1994, the library was hosted in an old villa on Tomšičeva Street 7, and in 1994 it was moved to the current premises on Trg republike 3.

Its basic mission was to support education and research at institutions of higher education for polytechnics and science, and through its activities it also provided indirect support to the economy. In the first years, the main focus was on building the library fund and its arrangement according to modern professional guidelines, managing the special libraries’ union catalog and publishing a list of periodical publications of foreign technical journals in libraries in Slovenia.

In the 1970s, the library began to intensify connections with related organizations abroad and became a member of various international professional associations and bodies, which allowed for a better monitoring of the development of librarianship and information science in the world, and for an innovative introduction of new methods and workflows in the field of scientific and professional information. The library also successfully integrated in international interlibrary loan networks.

The CTK has been constantly adapting to technological developments and updating its services through introduction of new technologies. As first library in the former Yugoslavia, it introduced modern methods of scientific and professional information based on the use of new technological equipment.

With the development of the COBISS software service, the library gradually automated most of its activities at the end of the 1990s and became one of the largest and most influential members of the unified computer-assisted library information system in Slovenia.

In the new millennium, the CTK was the initiator and manager of consortial subscriptions of the most important collections of professional and scientific electronic journals; and it also played a leading role in the development of the digital library of the University of Ljubljana.

The CTK has been led by the following directors:

For a short time, the CTK was also led by prof. Slavica Ludvik, Sonja Tovornik and Cveta Kovačič.